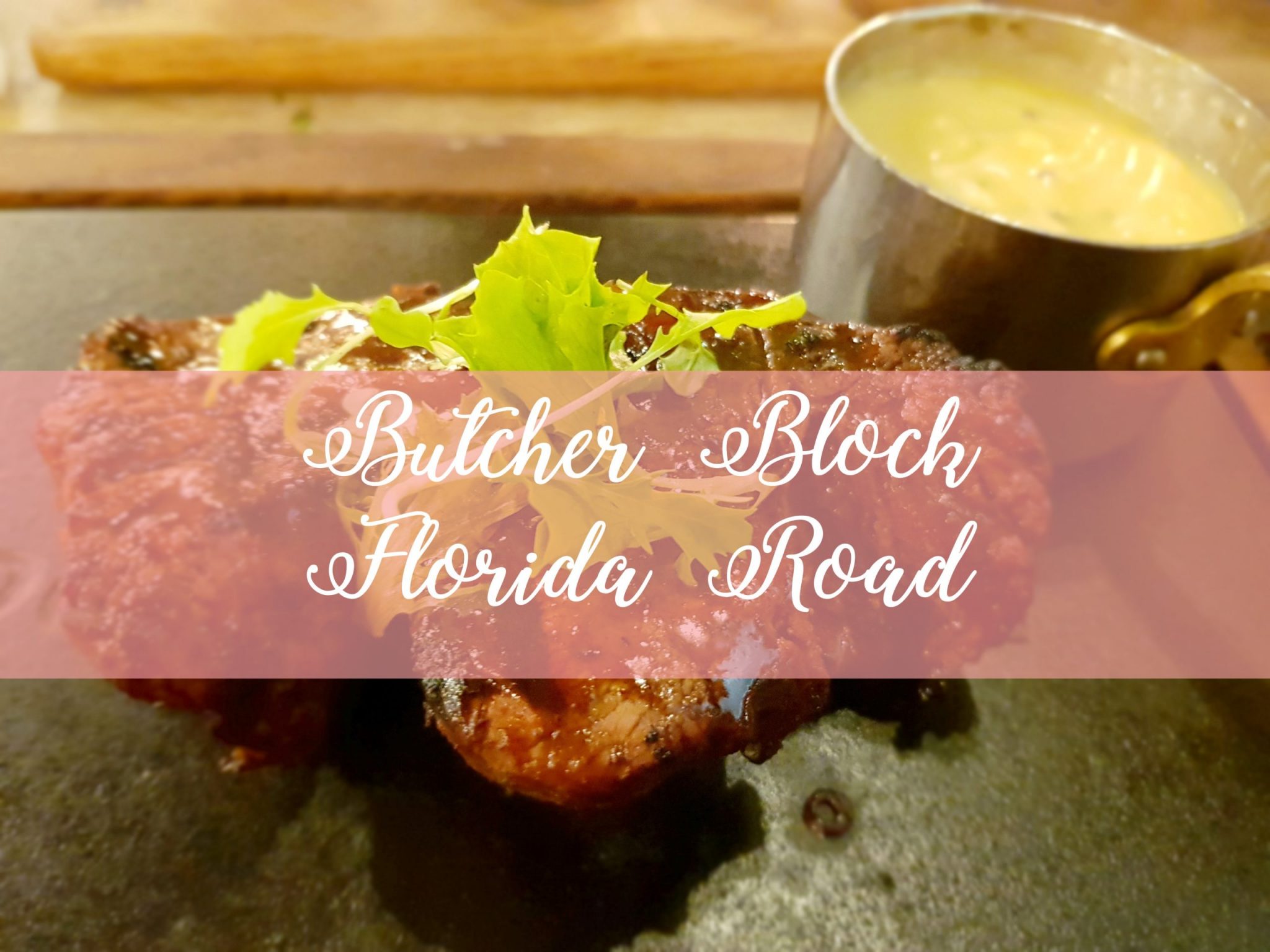 Hubby and I really do enjoy eating out.  I mean, let’s be honest – who doesn’t?  But we eat out a lot more than we probably should.  It was therefore no surprise that we would go for a great meal on Valentine’s Day.  Because there’s nothing romantic about washing dishes!

We opted to try out Butcher Block on Florida Road.  Somewhere we’d never been, and somewhere I’d heard good things about.

We made a booking with the initial plan to try out their Valentine’s Day set menu.  Three courses each for R350pp, and wowzers did it look amazing.  Check it out:

Unfortunately, we ate so much chocolate and cake at work on the day, that by the time dinner rolled around, neither of us really wanted dessert.  So we opted to choose off their regular menu instead, and have a starter and a main each.

We arrived on Florida Road, and realised straight away that parking was going to be an issue.  This street buzzes at the best of times, but being Valentine’s Day, everyone and their brother’s uncle’s dog had made dinner bookings to romance their loved ones.  We drove up the road, turned around and drove back down, only to hit the biggest luck.  There are two parkings directly outside the restaurant, and as we were driving up, a car drove out of one of them!  To score a parking right outside your venue of choice on Florida Road, on a busy night is a rare occurrence!  We high fived (yes, really, we do that) and checked in with the lovely hostess. 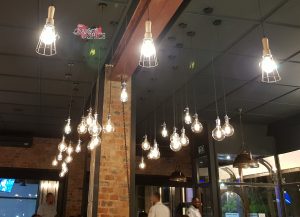 Butcher Block is just beautiful – exposed brick, metal beams, gorgeous lighting, white brick tiles in the kitchen and what appeared to be a decorative ox skull complete with horns.  Hubby really liked that.  So much so, that I need to stop him finding one for our home.  The hanging light bulbs, however, I need!  Loved how they were clustered together.

The staff had also done a full Valentine’s Day theme for the night, with red roses and red napkins on all the tables, as well as little tealight candles.

The staff were all exceptionally friendly and welcoming.  Our waiter was difficult to find at one point, when we were ready to get the bill, but I do understand that the restaurant was very busy. 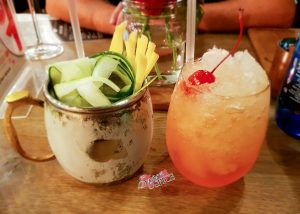 We had originally wanted to share a bottle of wine over dinner.  The wine list was lovely – not excessively large, but it had just the right amount of variety.  However, once we’d settled down and taken a browse through the drinks menu, we decided we felt like a cocktail instead of wine. 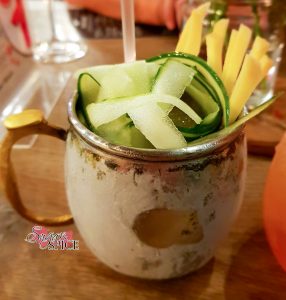 Hubby went for one of his favourites – a Moscow Mule.  The cocktail arrived and was packed with ribbons of cucumber and sticks of fresh ginger.  Very refreshing and light. 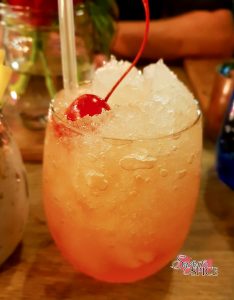 I opted for something new – a Watermelon Basil Cooler.  I couldn’t taste any basil to be very honest, but there was a lovely watermelon flavour and the ginger beer wasn’t too overpowering.  A really tasty, refreshing cocktail, and one I’d have again. 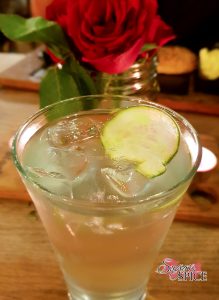 Butcher Block also have a nice selection of gins, and I decided it was time I finally tried out Hendrick’s.  It came with a glass bottle of tonic water and a slice of cucumber, and was one of the nicest G n T’s I’ve had in a while!

Now, it took us quite some time to narrow down what we wanted to eat.  The menu has so much delicious variety on it that we were quite torn.  Eventually we narrowed it down.

Butcher Block has some incredible sounding starters on their menu.  The Biltong Pâté (R65) sounds so tasty, and their Three Cheese Prawns (R70) sounds decadent!  We went with the following: 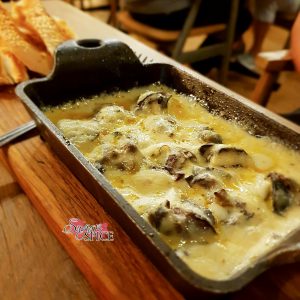 Hubby is obsessed with snails.  While I like to think I’m a pretty adventurous eater, I am not a fan of snails at all.  I did taste the sauce with a bit of the bread and it was divine – rich and creamy.  What we were impressed with, was that these didn’t come in the regular round snails dish with only 6 snails in.  There were a lot of snails in the portion with a generous amount of cheese and toasted bread.  Definitely worth a try if you’re an escargot fan. 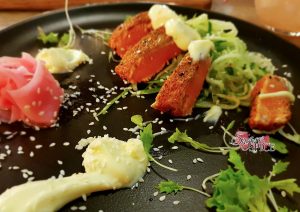 I love sushi and especially salmon sashimi.  Since I’d planned on something heavy for my main course, I wanted to go for something light and fresh for my starter.  The sashimi arrived beautifully seared and artfully arranged on the plate with thin strips of cucumber, sesame seds, mayo and a pickled ginger rose.  It was melt-in-your-mouth delicious.

And now what Butcher Block is famous for – it’s MEAT!  Hubs and I are both big red meat lovers, so it went without saying we’d indulge in some of their steaks and burgers.  I really do want to try some of their other offerings at some point.  The Roasted Pork Belly (R165) and the Bordelaise + Bone Marrow (R185) served on either Rump or Sirloin sound irresistible. 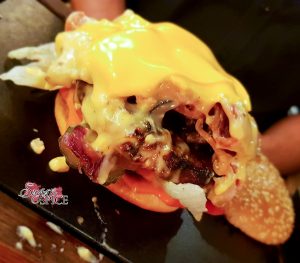 Hubby decided that a burger was the order of the day, and after being super indecisive (he kept going between 3 burgers) he eventually settled on the BBC – a burger topped with biltong shavings, bacon and cheese.  He also opted for mash instead of chips with his burger, as he’s a mash fanatic and wanted to see how the mash was at Butcher Block.

He had ZERO regrets.  In fact, my hubby who can demolish any meal and often finish mine, couldn’t finish it and had to take a doggy bag home.  I do put this down partly to the large, rich starter he ate, as well as this burger being huge and piled high with toppings.

The only negative aspect of the meal was the mash.  While it was exceptionally tasty, it was quite lumpy.  From previous restaurant reviews, you’ll know that we like our mash as smooth as possible.  I don’t know why so many restaurants are insisting on this rustic approach to their mash.

Big ups to Butcher Block for not skimping on the burger toppings – take a look at that photo and see how much bacon alone is on there! 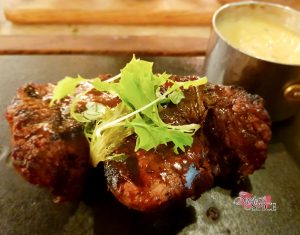 I decided to go for something which seems pretty plain when compared to the incredible sounding Butcher’s Choice dishes.  I wanted a regular fillet, a cheese sauce and chips.

Now, you won’t believe how often I’ve been to a restaurant and ordered this, only for them to forget the sauce, overcook the steak or serve me cold chips.  I’ve come to realise that the best way to judge a restaurant is to order something simple and see how that comes. 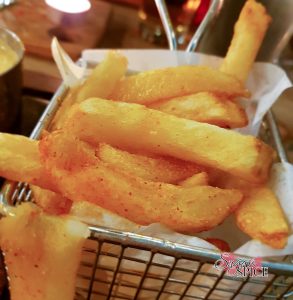 I wasn’t disappointed in the slightest.

My meal arrived on a heated metal and wooden board.  So hot that my steak was still sizzling!  Cheese sauce on the side, as requested on on the heated board to keep it hot.  Chips on the side in a basket.

The first thing I did was try a chip, and they were still piping hot and fresh from the fryer.  My cheese sauce was delicious (I think they must have added biltong to the sauce? I’m not entirely sure) and one of the best ones I’ve had out.  Even my steak was cooked EXACTLY as I’d asked for it to be – medium rare.

Needless to say I finished my whole meal.

After all the food we managed to squeeze in, we had no space for pudding.  Plus that whole thing where we’d eaten cupcakes and chocolates at work all day, being Valentine’s and all.  I was pretty sad, as they do Deep Fried Oreos (R45)!  I think we’ll really have to plan a repeat performance, seeing as I missed out on those and the Koeksister and Ice Cream (R45) which I saw served to someone near us.

I was so impressed with the restaurant and the food, and so was my hubby.  All I can say is that we’ll most definitely be back to try out some of those other delicious meals that caught my eye!

Have you ever eaten at one of the Butcher Block franchises?  What were your favourite meals?

Here are some other local restaurants we’ve eaten at: –

**DISCLAIMER – while we were treated to a voucher on behalf of Butcher Block Florida Road, all opinions are honest and our own.**

Musgrave Copper – The Brandy For The Sophisticated Palate