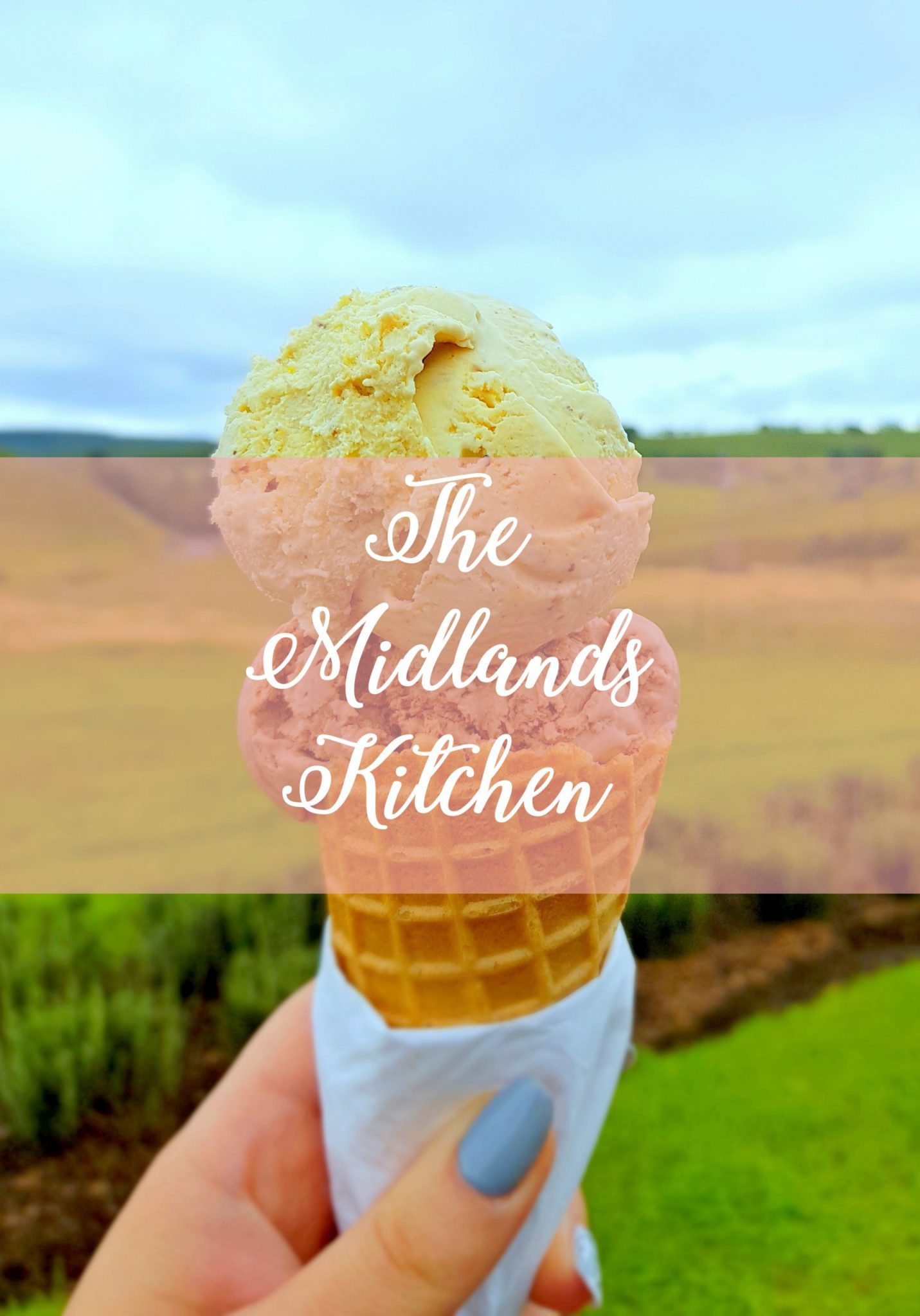 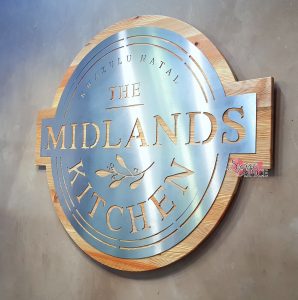 One our various trips up to the KwaZulu Natal Midlands Meander, Hubby and I have noticed The Midlands Kitchen.  It always came at inopportune moments – the first, when we’d stuffed ourselves silly at the breakfast buffet at Granny Mouse.  Every other time, we’d been up there trying very specific eateries, or just not really hungry.  The most we’d managed to sample was a juice from Juice Brew, which was probably the tastiest, freshest juice I’d ever had.

It comes as no surprise then, that we jumped at the opportunity to go and sit down and REALLY try out some of the dishes that the various kitchens serve up. 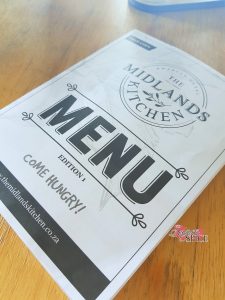 What exactly is The Midlands Kitchen, you may ask?

Well, it’s a collection of 15 different kitchens, housed in one big building.  It looks kind of like a food court with a seating area and many different counters serving different foods.  They range widely from Mediterranean, to burgers, to pizza, Mexican, Vegan, Chicken, Indian and even Gelato and Waffles!  So… you can kind of see why their slogan is ‘Come Hungry‘.  I mean, you don’t want to go there, have a cappuccino, and call it a day?! 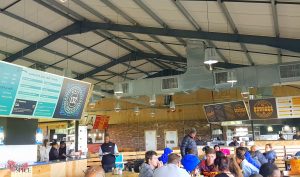 The Midlands Kitchen is housed in what looks like a gigantic warehouse or shed from the outside.  You can even see an old fashioned tractor set up as decor outside! 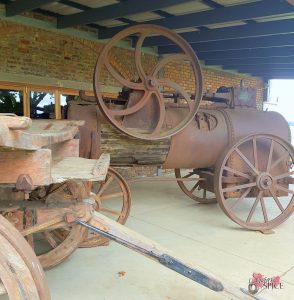 As I mentioned, it’s very much like a food court, with all the different kitchens spotted around, and a seating area.  By the looks of it, you can either choose your own seats and order yourself in a certain section, or sit in the served section, where a waitron will take your order and bring your dishes to you.  It can be a little overwhelming – you’re so spoilt for choice – so we opted to be served by a waitron.  This was definitely the busiest area too! 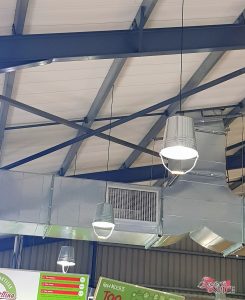 What we really loved were the light fixtures – they’re milking buckets!  So cute and really effective.

Overall the place was buzzing, and all sorts of tasty-looking dishes were constantly going past us.

There is also a Grab and Go section in an adjoining building, where you can get your hands on eats and drinks takeaway-style.  Very nice idea, to have the two separated – is there anything more frustrating when you’re in a bit of a rush, and waiting behind someone who’s taking their time ordering a huge meal?

All the staff we encountered were exceptionally friendly and helpful.  Managers are ever-present, and they had enough waitrons to handle the sizeable seating area with ease. 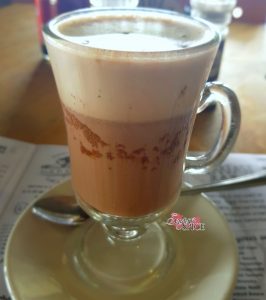 We arrived on a day that was misty, drizzly and 13° centigrade.  So it was understandable that the first thing we did was browse the Exit 132 menu – delicious coffees and warm drinks.  We both went for the Farmyard Hot Chocolate, made with locally sourced chocolate and homegrown milk.  You really could taste the freshness of the milk too!  Any of the drinks at Exit 132 are served as either Bull (500ml), Cow (350ml) or Calf (250ml).  We weren’t asked what size we’d like, and Hubby and I still can’t decide if we were given a Cow or a Calf.  Either way, it was super creamy and just sweet enough!

Now, with a selection of menus as varied as this, I think you can understand why we wanted to try something from several different kitchens.  Sadly, we were told that the Empanada Bar at El Tostada wasn’t open, and that the Artisan Pies kitchen did not have all of their pies in stock, including the Curry Pie we’d had our eyes on.  I will definitely be going back to sample some of the other food that El Tostada offers, as well as the burgers from The Burger & Butcher.  We saw other customers ordering those burgers and we so regret not trying one out. 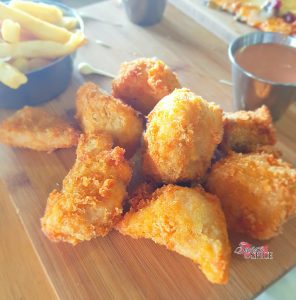 Hubs had a craving for friend chicken, so we ordered a portion of The Monok from The Chicken Authority.  It was described as ‘crispy chicken nuggets, chips, honey and srirracha sauce’.  We assumed that this meant it was a single sauce that contained both honey and srirracha, but it arrived with two separate ramekins.  One of just pure honey, one of a srirracha mayo that had no heat in it whatsoever.  The flavour was great though, and we found that if you dip the nugget into the honey first, followed by the srirracha sauce, the combination was just dynamite!  The chips were top notch – I’m a super fussy chip-eater, and I was tempted to order an extra portion of them.  The chicken nuggets were super crunchy and while they were the teensiest bit dry, they were delicious. 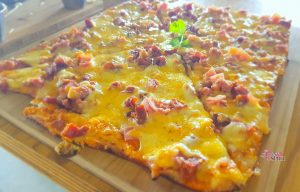 This was definitely my favourite dish.  I’m a complete pizza fiend, so there was no doubt I’d be sampling one of the pizzas from Mama Stellino.  We went for The Milan – topped with bacon, ham, salami, chorizo and grated parmesan.  The pizza was SUPER cheesy and they weren’t shy with the amount of toppings added.  Overall a damn delicious pizza!  They had some other really delicious sounding ones too – The Genoa (smoked salmon, avocado, rocket, chives, halloumi, caramelised onion) and The Amalfi (pulled pork belly, sweet and spicy, garlic aioli, spring onion and mushrooms). 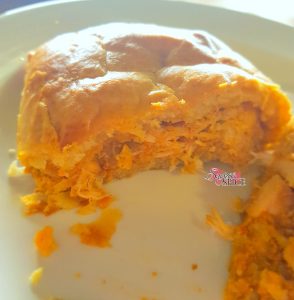 We insisted on sampling one of the pies from Artisan Pies, as it was just such ‘pie weather’.   We went for the Peri Peri Chicken Pie, and we weren’t disappointed.  I know this picture isn’t as pretty as one with the pie whole and untouched, but I just had to show you how much filling was in it.  So many pies are filled with gravy, and a couple of chunks of meat.  This was packed with chicken and super spicy!  It was a huge pie too!  They also have the option to add chips and gravy, making your pie into a full meal. 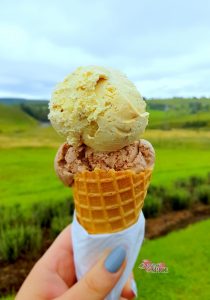 And because I’m such a damned sugar addict, I couldn’t leave without sampling the Wild Child Gelato.  They have a small, but delightful selection of flavours, and I was thrilled to bits to see Pistachio on there.  I did originally order the Praline Pistachio and White Chocolate, but unfortunately something got lost on the way to the kitchen and I get the regular Chocolate gelato.  I didn’t want to send it back, as my cone looked so beautiful, and I was still pretty happy with Chocolate.  It was literally the best Chocolate ice cream I’ve had.  Rich and creamy.  The Praline Pistachio only had a very faint hint of pistachio flavour, but it was buttery and rich and oh-so-good.

Totally worth shivering all the way to the car in the rain, clutching my ice cream and mumbling in between mouthfuls about how good it was.  No regrets!

I will most definitely be back to try some of the other kitchens at The Midlands Kitchen.  I insist on us trying those burgers (my word they looked mouthwatering!) and the tacos and waffles also looked pretty good.  Plus, you know, more of that gelato wouldn’t go amiss either.

Have you tried any of the kitchens at The Midlands Kitchen?  If so, which ones?

**DISCLAIMER – while we were treated to a meal on behalf of The Midlands Kitchen, all opinions are honest and my own.**

A Midlands weekend with the girls!