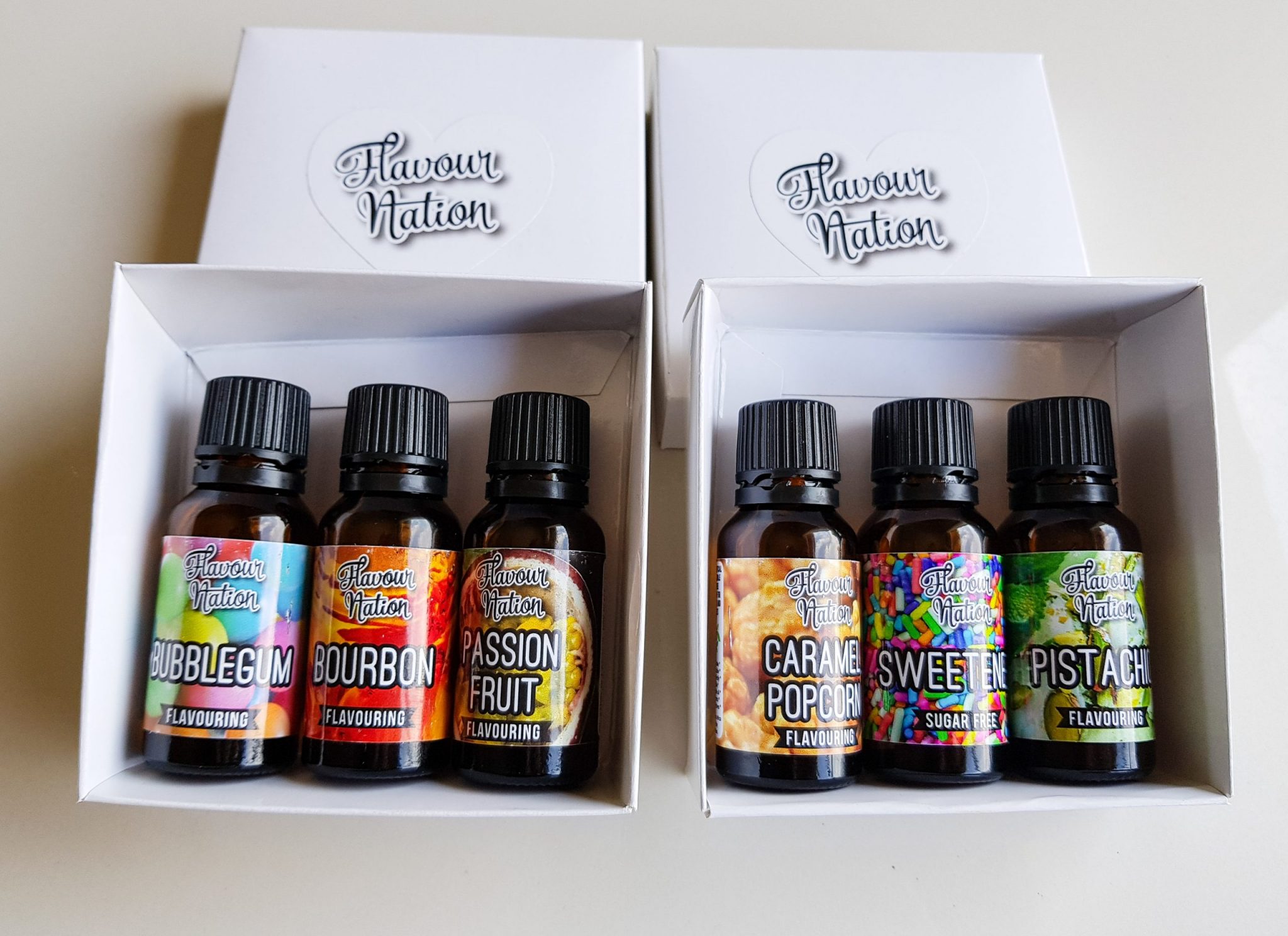 After seeing Leigh from Lipgloss Is My Life talking about Flavour Nation and their delectable food flavourings, I knew I had to give them a try.  I popped onto the website, browsed for a while, and then I placed an order for 4 flavours and 1 sweetener.  The flavours themselves aren’t sweet, so you can use sugar with them, or one of the two sweeteners, a sugar free sweetener and a stevia one.  I’m not one for stevia as it can be quite bitter, so I grabbed the other sweetener – a sugar free sweetener that actually tastes a little like candy floss.

The package didn’t take long to arrive, and the kind people at Flavour Nation decided that my box with only 2 flavours in (they come in boxes of 3) seemed lonely and added an extra as a gift.  How darned cute is the packaging – read the sticker on the bottom of the box! 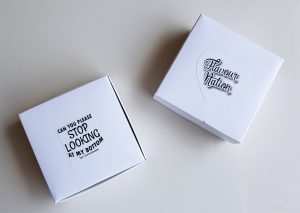 I bought the following flavours:

Bubblegum, Bourbon (for the hubby), Caramel Popcorn, Pistachio, the sugar free Sweetener and then received Passion Fruit as a thank you from the company – always a nice touch. 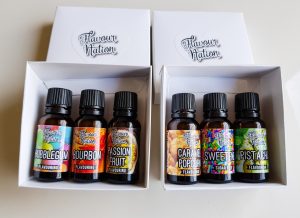 So let’s get down to the review of the flavours. 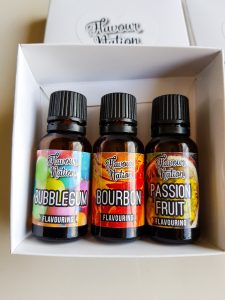 The BUBBLEGUM is my favourite flavour out of the bunch, but that’s because I’m that 31 year old woman who orders a bubblegum milkshake at a restaurant.  Grown up, no? It takes me back to my childhood, when it was the one thing I really wanted, yet my mom wasn’t super keen on giving clumsy little Siobhan a bright blue drink to spill all over herself.  I even loved that revolting blue Sparletta drink Bubble Blue (I think that’s what it was called), which hardly anyone else can remember.  And I remember my sister spilling it all over my white shorts.  Bye bye shorts.

Either way, this bubblegum is delicious.  I made a milkshake with it one night at home, with some full cream milk, some Hubertos vanilla ice cream, and 10 drops of the flavour.  I decided then to add some blue food colouring, because why not?  And then I felt guilty that I was a grown woman, and poured it into a wine glass.  But then I felt it needed whipped cream and sprinkles and a colourful straw.  It was AMAZING.

Since then I even took the basic ice cream recipe given to me by Leigh (we’ve been all about the Flavour Nation gossiping on social media) and made bright blue bubblegum ice cream.  I only made it last night, but wowzers did it taste good, and I’m keen to scoop some out tonight and eat it.  Basically – a tin of condensed milk, a tub of cream whipped and two beaten egg whites.  Next time I think I’ll add another whipped tub of cream, as I personally prefer my ice cream creamier as opposed to rich and sweet.  ADDED TIP: we added a splash of alcohol to the ice cream, to prevent it creating little icicles in it.  Vodka or Bacardi are great as they won’t compromise the flavour.

I bought the BOURBON flavouring as my hubby has a new affinity for Jack Daniels and Jim Beam, and I thought this could be his way of getting the flavour during the day without the alcohol (think an Irish Coffee kind of vibe at work).  Hubby disagreed, as even though it smells and tastes like a decent enough Bourbon, he likes the extra kick it gives with his Coke or on the rocks.  Apparently I missed the whole point of Bourbon?  Bad wife!  Anyway, this will be nice to put into cupcake or cake frosting or batter – Leigh had the same idea too in her blog post on Flavour Nation.

The kind folks at Flavour Nation also popped a PASSION FRUIT flavour into my box, which is something I probably wouldn’t have tried.  So glad they did, as it’s delicious!  I’ve added it to my morning smoothie (vanilla shake powder, almond milk, plain yoghurt, a few drops of the sweetener and some Passion Fruit flavour) and to my boring old bottle of water on my desk at work, with some of the sweetener.  It just brings so much more life to otherwise mundane drinks. 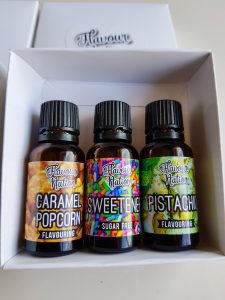 I grew up loving Diddle Daddle popcorn when I was younger, right from the second it launched on the market.  That crunchy, sweet and salty popcorn was the ideal snack, but I could never eat more than a little bag as it was so sweet.  I bought the CARAMEL POPCORN flavour with this in mind, and decided that making Dom Pedros, milkshakes or an ice cream would be a grand idea.  Even cake frosting, or adding it to vanilla cake batter.  Come to think of it, my morning Jungle Oats could be even better with this.  Where do the ideas stop!?

I’ve been adding this to my morning (and afternoon.. and evening) coffees, whether it’s just a regular coffee with milk and sugar (or the sweetener drops), or to a Nescafe Cappucino sachet.  It is so delicious I could cry.

I opted for the sugar free SWEETENER drops instead of Stevia which I know can tend to be bitter.  I’m so glad I did!  These Sweetener drops don’t have that disgusting sweetener aftertaste that is so off-putting, and they taste like candy.  I’ve found that 6-8 drops is ideal for me, and it states that 4 drops is equal to a teaspoon of sugar.  I usually have 2 sugars in my coffee (naughty me!), but 8 drops of this is much too sweet.  6 drops hits the spot perfectly!

I was extremely keen on the PISTACHIO flavour too – I love a really good, rich Pistachio ice cream.  The Woolworths Extremely Creamy Pistachio Ice Cream is super decadent and well worth a splurge.  I had dreams of Pistachio in my coffee, in my yoghurt, grown up Pistachio milkshakes or Dom Pedros, Pistachio frosting on cupcakes and making my very own Pistachio ice cream.  Sadly, this is the only flavour that disappointed in the whole batch.  It smells nothing like Pistachio, in fact it smells like freshly mown grass.  Strange!  I thought maybe it was just that it was so concentrated, and that if I diluted it, it would come right.  I tried it in a milkshake, and added only 8 drops in case it didn’t work.  Sadly, the only flavour that came through was grass yet again.  Perhaps I was given a bottle that was incorrectly labelled, or perhaps it’s a flavour that the brand needs to work on?  To me, it could have been a Wheatgrass flavour as opposed to Pistachio.

Please Flavour Nation, if this is an error, or you’re still working on the formula, let me know when you’ve got it right – a small problem like this won’t stop me from buying from you again, as the rest of the order was spot on, and the customer service was fantastic!

I’m actually already looking at another order – the hubby wants to try the Cola flavour (that man is Coke obsessed, a habit we need to quit!), and I have a long list of possibilities.  For flavouring water this summer, I want to try the Melon and the Strawberry-Kiwi.  For baking or milkshakes or anything else, there’s a Peanut Butter (helloooooooooo PB coffee), White Chocolate and Apple Crumble that are screaming my name.  You can even make a special flavour request, and if they have that or can make it, you’ll get it!  I’m keen on seeing about Candy Floss, Liquorice or even Birthday Cake flavours!

Have you tried anything from Flavour Nation?  Anything that peaks your interest?

*This was not a sponsored post.  I paid for my order myself, and loved it*