I’m one of those people that doesn’t have a set ‘drink’.  Yes, for the most part, I’ll usually opt for a glass of wine.  I do like a good cocktail though, and I’ve been known to sample different spirits, ciders and beer.  I choose my drink depending on my mood.  So, when I was contacted by a lovely company called Merriment & Co, asking if I’d like to review one of their products, I opted to fully embrace my Irish side and try out The Dubliner Irish Whiskey.

Now, Merriment & Co are, as their website claims, ‘Merchants, Marketeers and Manufacturers of Fine Spirits, Wine and Champagne’.  They have some superb offerings and there is even a Whiskey & Honeycomb version from The Dubliner that sounds sublime.  I opted for the unique Bourbon Cask Aged Irish Whiskey from The Dubliner.  Our family is Irish (so a love of whiskey is a given), but myself and Hubs do like a good bourbon too. 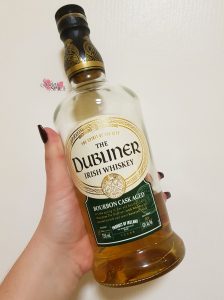 Yes.  I realise this bottle is most definitely not full.

I’d like to complain that it arrived this way, but I’d be lying.  You see, we were so excited to give it a try, that we cracked it open one night with my folks and it was so damned good that there is less than a third left.  I can’t even bother to hang my head in shame!

The Dubliner Irish Whiskey is a blend of single malt and grain whiskies, and is matured in Kentucky bourbon oak casks.  Believe it or not, you truly do get the taste of both a good Irish whiskey AND a bourbon out of this!  It’s warm and smooth, yet has an undeniable sweetness that you only find in a bourbon.  It’s strong though, so I’d highly recommend you have this on the rocks if you’re whiskey newbie.  Only a true whiskey fiend will be able to take this straight.  It has the smoothness of an Irish whiskey, but the punch of a bourbon! 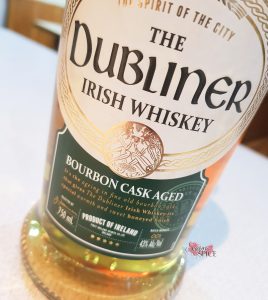 Now, much to my father’s chagrin, it didn’t stop there.  He insisted on his being simply poured over a couple of ice cubes, nothing more.  Me on the other hand – I noticed on The Dubliner site that this whiskey is ‘perfect for sipping, perfect for cocktails’.  I decided that going the traditional route is usually the best – an Old Fashioned!

The Old Fashioned is said to have been created in honour of Colonel James E. Pepper, a bourbon distiller.  A bartender at a gentlemen’s club in Louisville, and the recipe then made it’s way to the Waldorf Astoria hotel bar in New York City.  Traditionally the drink is made with bourbon, but we’ll call what we created an Irish Old Fashioned then.  Being that The Dubliner is an Irish whiskey aged in bourbon casks, to me it had enough of the bourbon flavour to work. 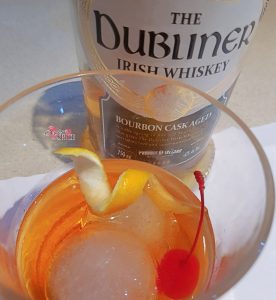 1 lump of sugar (I had no lumps, so I used a tsp of brown sugar)

2 shots of The Dubliner Irish Whiskey

A twist of orange peel

Place sugar, water and Angostura bitters in the bottom of a tumbler.  Muddle together until sugar is dissolved.

Cut a sliver of orange peel and twist it – twisting it allows the natural oils and flavour to come out!

Add ice, the orange peel twist and the 2 shots of whiskey to your tumbler, and swirl.

Pop a cherry on the top.

Trust me, this was so damn delicious, we made seconds.  And thirds.

If you’d like to place an order for the delicious The Dubliner Irish Whiskey, you can contact 021 870 1130 or orders@liquorgistics.co.za

What is your drink of choice?

**DISCLAIMER – while the bottle of whiskey was a press sample from Merriment & Co, all opinions are honest and my own.  This post was not sponsored.**