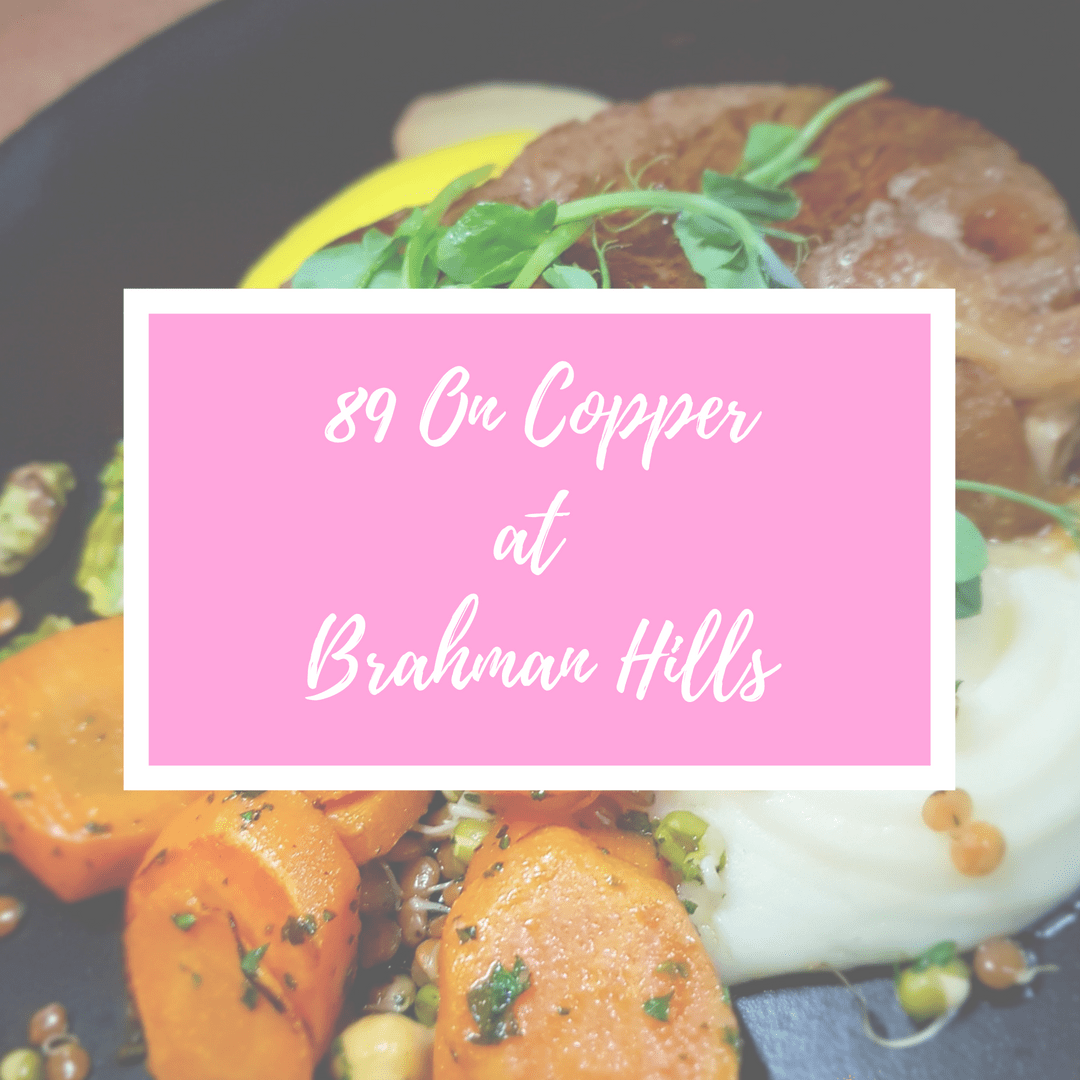 Last week I posted about the romantic winter getaway Hubby and I had over our anniversary weekend at Brahman Hills.  You can read all about that HERE, but for now I want to tell you about the scrumptious meal we had at their restaurant in the wine cellar, 89 On Copper.

Hubs and I braved the cold to head out of our warm one-bedroom cottage at Brahman Hills, and drive on over to the main hotel area, where 89 On Copper is situated.  It was around 6ºC and icy, but once we entered the hotel area, it was so cosy, with a roaring fire right by reception.  We headed downstairs to the cellar, walking past the gorgeous Copper cellar bar, and into the restaurant. 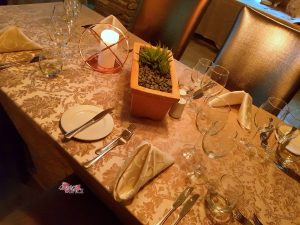 89 On Copper is gloriously romantic.  Think soft, warm lights, beautiful linens and cellar decor.  The restaurant only seats up to 26 people, so it’s very intimate.  You can book it for a private dinner too, which I liked.  It would be a fabulous spot to celebrate an engagement or a landmark birthday.

While the space is small, you never feel like you’re sitting on top of other diners.  Hubs and I felt like we were in our own little bubble, and all we could hear around us was soft murmurs, clinking of cutlery and glasses, and the very appropriate bluesy jazz-styled music that was at the perfect level.  The room is also the perfect temperature – warm enough that you can remove your scarf and coat, yet not so hot or stuffy that you might feel claustrophobic in the small, enclosed space. 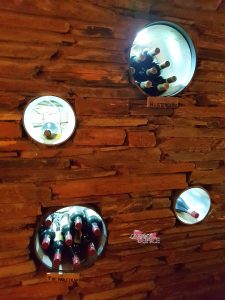 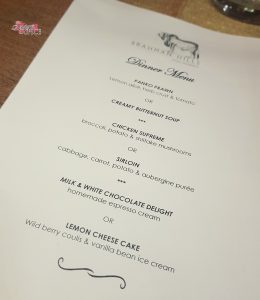 We ate from the 3-course dinner menu, which goes for R249pp, and the choices were lovely.  Varied, yet still simple.  We both opted for the Panko Prawns to start, and then Hubby went with the Sirloin for main and Milk & White Chocolate Delight for dessert.  I wanted to try something different to his meal, so I went for the Chicken Supreme for main and the Lemon Cheesecake for pud.

The chef sent out an amuse-bouche of Seared Tuna which was absolutely delicious, and truly set the tone for a lovely meal.  The tuna was seared so perfectly, and placed on a butternut puree.  It was melt-in-the-mouth good.  We also opted for a bottle of red wine, and went for The Wolftrap Syrah Mourvèdre Viognier, an easy-drinking red blend. 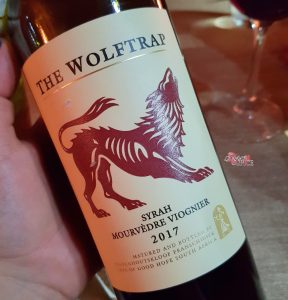 Our starters arrived soon after, and the prawns were absolutely delicious.  They were crispy on the outside, perfectly cooked on the inside.  The prawns were accompanied by a lemon aioli and a dusting of herbs, with a lemon gel that was just like a fresh squeeze of lemon on the seafood. 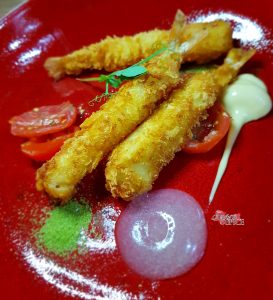 The service was prompt, and soon after we finished our starters, the dishes were cleared and our mains were served.

Hubby’s sirloin was cooked exactly as he’d asked for it, and although there was a bit of sinew, it was very tasty.  He even enjoyed the aubergine puree that came with it, and he’s not the biggest fan of aubergine.  The cabbage and carrots were fresh and crunchy, and amazingly enough the mashed potato was smooth (if you’ve read my food reviews before, we’re sticklers for smooth mash – none of this rustic, lumpy nonsense).

The only criticism was the bean and chickpea sprouts that were on the dish.  They didn’t really add to the plate at all, and in fact were a little too bitter with the other elements.  Perhaps a case of less is more? 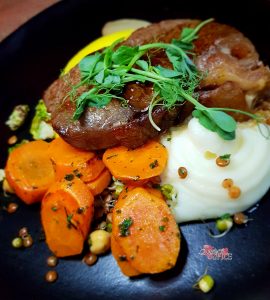 My dish was also lovely.  I would ideally have preferred a chicken thigh, as it was breast meat which can be a tad dry, yet the flavours were delicious, and it was a nicely sized portion.  I’m not a broccoli lover, yet if my broccoli was always served this way, I’d eat it every single time.  It was still slightly crunchy, and whatever it had been cooked in was very tasty.  The roast potatoes were perfectly crispy on the outside, yet fluffy on the inside (gosh, but I adore roast potatoes!), and the shitake mushroom sauce was gorgeous.  I also had what appeared to be a carrot puree, which was smooth and velvety. 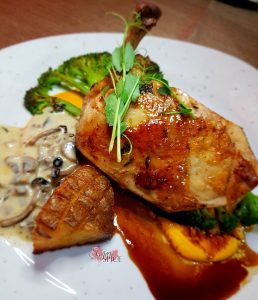 Our desserts were a little more confusing than the main, although they were also scrumptious.

Hubby’s Milk & White Chocolate Delight was definitely the winner of the two.  The chocolate mousse layers were light and fluffy, and the portion was a great size.  There was some kind of shortbread as the base, which stopped the dessert from being too rich or sweet, which I liked.

The ‘espresso cream’ listed on the menu was actually not a cream, but an ice cream.  It was divine though, and something I’d have a big bowl of on it’s own!

For some reason though, there was the same lemon gel that was served on our starter plates.  I don’t think it tied in with this dessert at all, and didn’t really need to be on the plate. 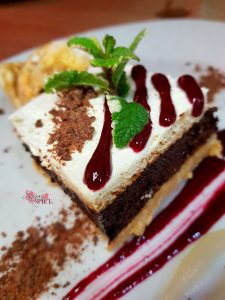 My Lemon Cheesecake was even more confusing.  According to the menu, it was served with wild berry coulis and vanilla bean ice cream.  So when the below plate was placed in front of me, I was confused by how small the slice of ‘cheesecake’ was, especially in comparison to the size of the other dessert.

What was strange, was that there was, in fact, no ice cream on this plate.  What looks like a ball of vanilla ice cream, was actually a ball of cheesecake, rolled in the crumbs.  Kind of like a deconstructed cheesecake.  I don’t know why the chef felt the need to place two different kinds of cheesecake on the plate, or why they left off the vanilla ice cream.

There was the same lemon gel on this plate, yet you could kind of excuse it, as it was a lemon cheesecake.  However, the strange garnish of chopped up maraschino cherries and red jelly was also odd, and so unnecessary.  I would have been happy to just have the ball of cheesecake, the crumbs and the delicious berry coulis on the plate.  Another case of less is more I feel. 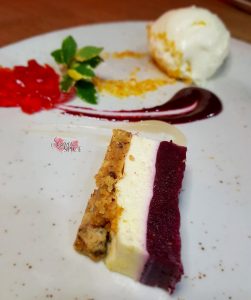 We were, overall, very impressed with the quality of the three-course meal, especially for the price.  It definitely gives you bang for your buck, and allows you to experience a higher-end meal for a fantastic price.

89 On Copper welcomes both in-house guests of the hotel, as well as outside diners.  You’re able to make a booking on either 033-2666965 or email reservations@brahmanhills.co.za 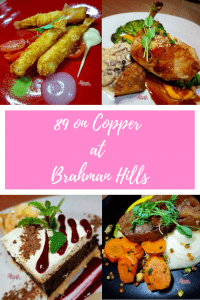 **DISCLAIMER – while we were hosted by 89 On Copper, and Brahman Hills for the weekend, all opinions are honest and my own.**

Jurassic World: Fallen Kingdom – is it a must-see?