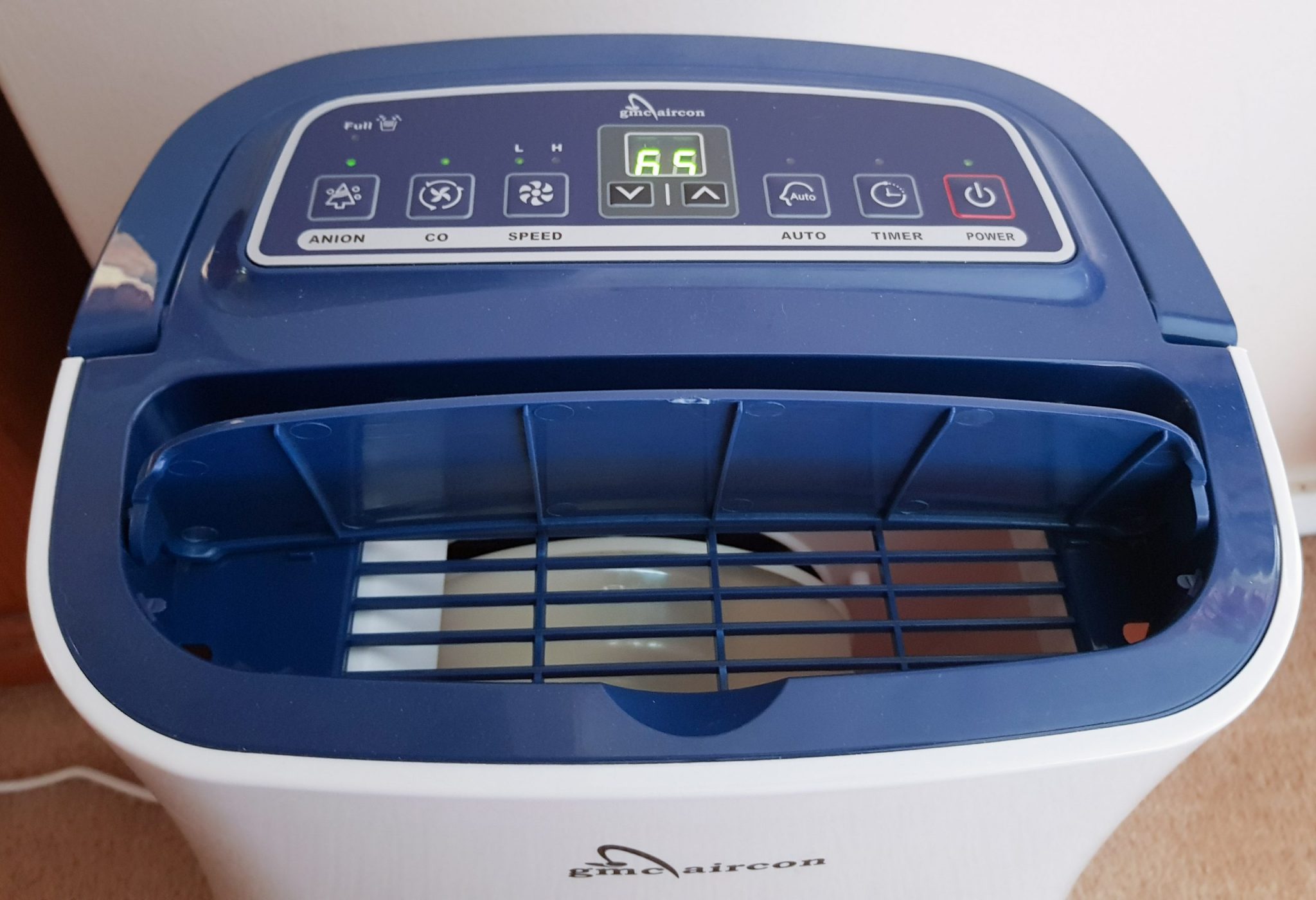 If you live (or ever have lived) in Durban, you know that the humidity is a real problem.  It can be downright oppressive in it’s heaviness, leaving you feeling sticky and uncomfortable.  It’s also such an issue for us ladies who spend time styling our hair, only for it to go frizzy and fluffy the second we leave our air-conditioned homes.

However, it’s a problem in our houses themselves too.  You know how, when you don’t have an extractor fan/open window in your bathroom, and you have a hot shower, the air gets all steamy and hot and damp?  Well, the Durban humidity does this to our homes in general.  It can cause problems like mould, mildew and rot.  It can cause mould and mildew on the walls and in the carpets.  Your carpets can rot and your books have patches of mildew on them.

So, when I was sent a GMC Dehumidifier to try out and review, I thought it sounded like a marvellous idea!

Our new toy arrived, the GMC DHF26L, and it couldn’t have come at a better time.  I wanted to test it out in my parent’s place for a number of reasons.  They have both their bedroom and en-suite bathroom carpeted.  That’s how the house came, and they’ve never changed it.  This causes problems in the bathroom, as you can only imagine.  This summer seems to have been particularly bad humidity wise, and the bathroom was even smelling damp a lot of the time. 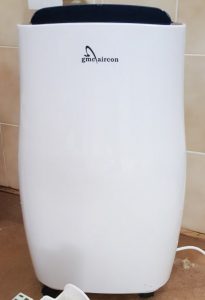 Then came the BIGGEST issue.  If you live in the Upper Highway area, you’ll probably know the hassles we’ve been having with water.  Pipes have been bursting almost once a week for the last couple of months, resulting in no water for hours and hours at a time.  Sometimes a whole day would go by with no water, until the pipes were repaired.  Turns out, the water restrictors that had been put in place were causing a build up of pressure that the old pipes couldn’t take, and the repairs being done were not enough to prevent it happening again.

Quite ironic, that the thing put in place to help with water loss, is the thing causing the water to be lost, no?

Anyway, this resulted in my parent’s toilet overflowing from the cistern twice.  As they used it and emptied the water in the cistern, it didn’t refill, as the water was off.  The part that apparently moves around and stops it refilling once it’s full got caught, and therefore didn’t stop the cistern filling up once the water came back on.  Twice, the surrounding carpet was saturated in water for hours at a time, and they’ve now had to cut part of the carpet away and are planning on tiling.

You can only imagine how damp the bathroom was smelling, and how great the chances of mould or mildew would be in this instance.  So I handed my Dad the box and told him to try the machine out in his bathroom.

Quite literally, overnight the room smelt fresh and clean and it felt drier.

My folks sent me pictures of the substantial amount of water that the machine took out of the room overnight, and they were overjoyed at how much cleaner and drier the air felt and smelled. 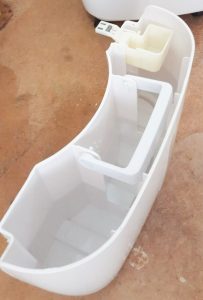 Please DO NOT drink the water it produces!  Haha!  My Dad, in a fit of genius decided that he’d solved Cape Town’s water crisis with one R3495.00 machine.  While it will indeed help to draw any moisture out of the air, even in the drought-stricken Cape Town (fab for the few times it does rain), the water should still be considered ‘grey water’, even though it has gone through a purifying filter.  It is not safe for pets to drink either.  Cape Town folks (all of us countrywide actually) could therefore use the machine to create water for flushing toilets, cleaning cars and watering the garden.  A great way to create something out of nothing, and put it to good use! 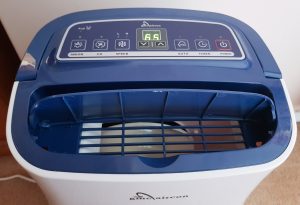 Over the course of the next week or so, the GMC DHF26L Dehumidifier continued to pull the dampness out of the air.  Their bathroom has always had a tendency to stay steamy and damp after the shower is used (probably greatly more so due to the fact it’s carpeted), and having the machine on dramatically cuts down on the time it’s damp.

The GMC DHF26L Dehumidifier not only sucks the dampness from the air though!  By doing this, it reduces and eliminates mould spores, condensation and other issues caused by the damp.  It also has an anti-bacterial filter, so it purifies your air for you as well.  Ionizers reduce any irritants in the air, so if you’re an allergy sufferer (like me, and I’m damned sick of popping anti-histamines thank you very much) this machine might be a life-line!

Another nice feature of the machine?  Once it’s reached it’s capacity of water in the tank, the dehumidifier turns off.  So you can set and forget!  It’s also super easy to operate – you almost don’t need the instruction manual that comes with it (although I always read these anyway).

The final cherries on top of this pile of pros?  It’s a small, easily portable machine that uses low power and actually has a 2 year warranty.

Want to get your hands on one yourself?

Well, you can contact GMC on 012-6611173, or complete the contact form on their website HERE.  Another added bonus is that if you’re based in Gauteng, any orders you place to collect yourself receive a 5% discount.

**DISCLAIMER – while I sent a Dehumidifier on behalf of GMC, all opinions are as always, honest and my own.  I truly think this is a gem of a machine if you suffer with damp in your home.**

Christmas Gift Guide for Her 2019