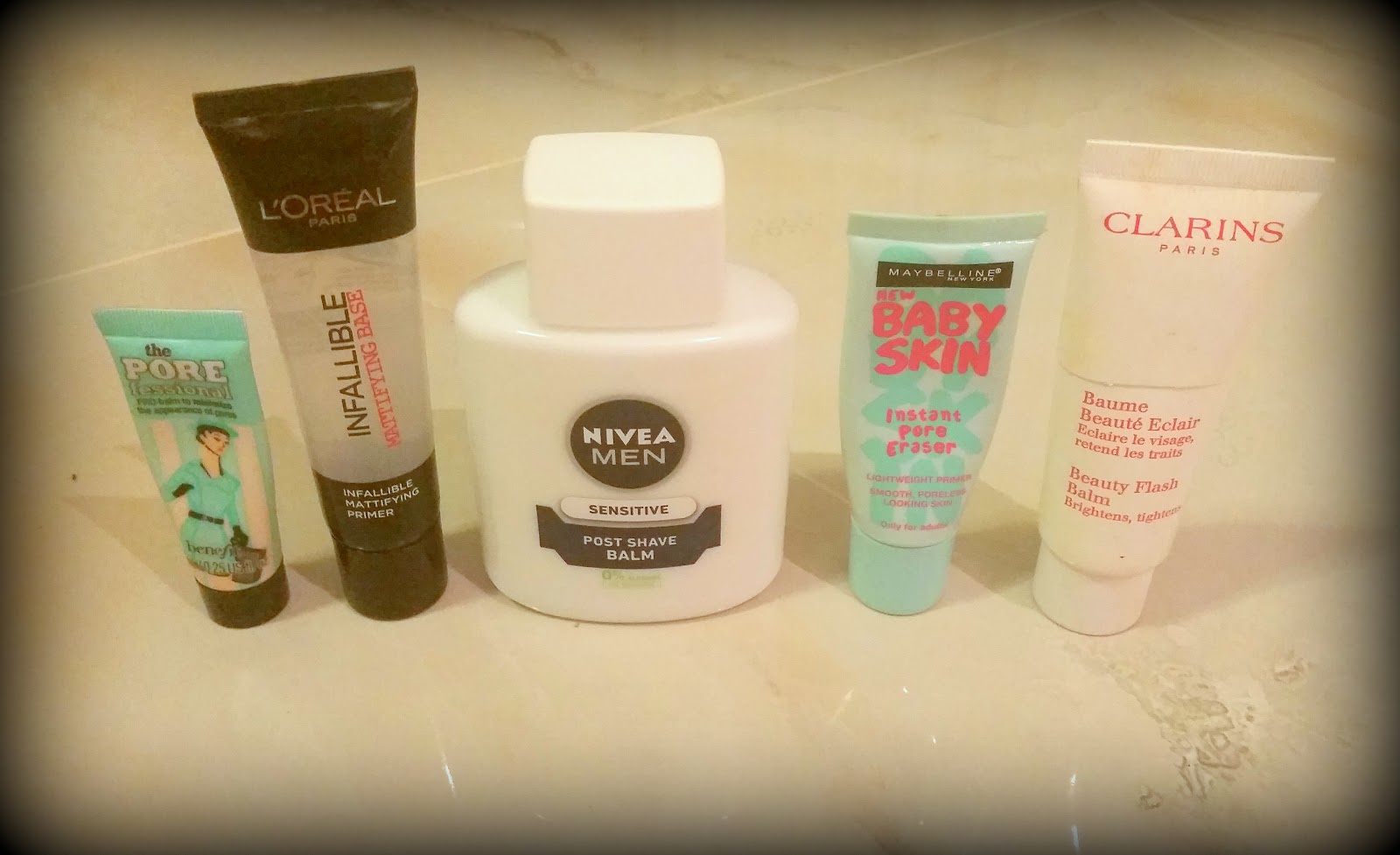 e2b8d 20160413 222525
Today I’m starting a new series on the blog – a Tuesday special, where I introduce 5 of my favourites (be it beauty favourites, fashion favourites, or just any old favourites!)
Lately I’ve really been getting more into using primers.  For a long time I’d only use a primer on a ‘special occasion’, when I wanted my makeup to stay flawless for an extended period of time.
These days, with so many drugstore or cheaper primer options on the market, it’s actually a doable thing to slap on a primer every single time you wear makeup.  It really doesn’t make a difference time-wise, and it really allows your makeup to apply so much more flawlessly, as well as giving you a freshly-done look for longer.
There are many different primers that have different uses, and I love using primers for different reasons.
Below are my current top 5 makeup primers: –

This cult primer is famous for a reason – it minimizes the appearance of pores, it’s slightly tinted, and it leaves you with an airbrushed finish.  I bought the mini as I had never tried the product before, and I didn’t want to spend nearly R400 on something, only for it to be a fail.  It wasn’t, but the mini has lasted me almost a year, so if I repurchase, I’ll probably go for the mini again.  I do prefer this during summer months though.

I hadn’t read any reviews on this when I saw it in the shops, but I was battling with the Durban humidity and heat, and the resulting makeup-melting.  This little gem keeps your makeup matte, so you won’t get shiny in the summer heat.  It really does work, and only towards the end of the day does any shine start to make an appearance.  It’s definitely not one for winter though, as it’ll actually dry me out.

Made famous by Nikkie Tutorials and her YouTube channel, no one would ever have guessed this stuff would make a fabulous primer.  You simply massage it into your skin until it starts to feel tacky, and then go on with your makeup.  My makeup looks so much more flawless and it stays put all day long.  I love how hydrating this feels on my skin too, and because it’s for sensitive skin, and contains no alcohol, it’s perfect for me.  I use this year-round.

This has been said to be a dupe for The Porefessional but it really isn’t.  The texture of the primer is a lot silkier and more silicone-y, as well as it being clear.  It is supposed to do the same thing, but in all honesty, this seems to work just a little less well than The Porefessional.  You also need to be careful to only use the tiniest amount, as too much will create too much slip and your makeup will just slide right off.  It’s a great drugstore primer though, and really does the job well!

This stuff was the first primer I ever tried – I used it on my Matric dance, to keep my makeup fresh and flawless all night, and it really worked.  It can be used as an energising and revitalising face mask, and it can be used under makeup to give you that slept-for-10-hours-solid look of a fresh face, even when you’re tired, hungover, overworked or stressed.  It makes your skin incredibly glowy and smooth, and your makeup lasts a lot longer than it usually would.  As you can see, my tube is much-loved and I’ve even cut it open to get the last little bit out.

Finally, although this is a brand new launch from Catrice, and I’ve only used it a handful of times so far in the week I’ve had it, I have to mention the Prime and Fine Beautifying Primer.  I saw this on the Catrice stand at my local Dischem, and hadn’t heard anything about it.  After one swatch, it made it’s way into my basket! It’s a beautiful soft rose colour, with ‘light-reflecting pearl pigments and vitamin E’, and I’ve used it with a couple of my different foundations.  It makes my skin glow in that gorgeous way, without looking like a grease-ball, and it definitely gives my skin an airbrushed finish too.  I feel like I might need to buy all the tubes of this I can find! It’ll be perfect for that glowy skin during winter, when we all feel dull and drab and in need of something to boost out skin.